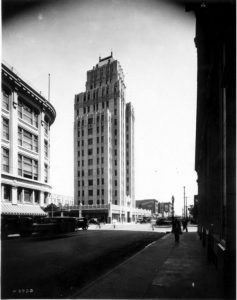 The O.T. Bassett Tower was completed in September, 1930 and was briefly the tallest building in El Paso, until the completion of the Hilton Hotel later the same year. Designed by Trost & Trost, this Art Deco masterpiece was patterned after the drawings of Finnish-American architect Eliel Saarinen, whose design Louis Sullivan referred to as “the New Direction of the Chicago School”.

The building was commissioned by El Paso entrepeneur Charles Bassett, and named for his father Oliver T. Bassett. Bassett had owned this city block for decades, starting with a lumberyard, and built (or was associated with building) three buildings on the block, including two skyscrapers that stand today. The Bassett Tower was constructed as an income property for Bassett, who built it (and had it designed) especially for Physicians and medical practices.

A nearly identical Art Deco tower was designed by Trost & Trost and built concurrently in Phoenix, called the Luhrs Tower. An interesting feature of the Bassett Tower is a bust over the southern main entrance of the building that may be the face of Henry C, Trost.

For more information, including the story of Saarinen’s contribution to the design, please see https://www.facebook.com/TrostSociety/posts/4199304233520944.