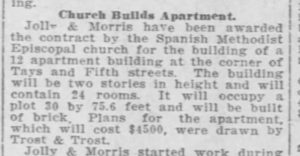 The El Paso Herald from July 26, 1915 announced that Jolly & Morris were awarded the contract to build an Apartment structure for the Spanish Methodist Episcopal Church at a cost of $4,500. We believe the building was erected, however we have no documentary evidence. If the Trost building was erected, it has been long demolished. For more information, please see https://www.henrytrost.org/buildings/spanish-methodist-episcopal-apartments/.

Newspaper clipping screenshot from the 06/26/1915 El Paso Herald via newspapers.com.