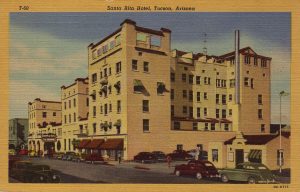 The Santa Rita Hotel was designed and completed by Henry C. Trost, independently of his firm of Trost & Rust, in circa 1902 – 1903 in Tucson, Arizona. The building is described as a Mission Revival structure by several sources, however its parallel lines and 90 degree angles suggest the Pueblo/Spanish design repeated in Trost’s Holland Hotel in Alpine, TX and the Gateway Remodel in El Paso. A 1917 addition, not designed by Trost, was added, which is reflected in the right-side taller wing we see in the attached photograph. The Trost half of the Santa Rita was demolished in the 1970s, and the 1917 addition was demolished in 2009.

Photograph is from Wikipedia Commons