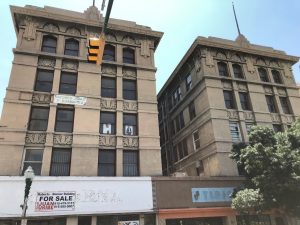 The Roberts-Banner Building, located at the corner of Mills and Mesa Streets downtown, was completed in 1910, at the time the largest Office building in El Paso. The lead architect for the firm of Trost & Trost was pioneer architect John J. Stewart, who had practiced in El Paso since 1881. The design is described as a “late 19th and early 20th century American Movements Romanesque”, although it lacks the characteristic Romanesque window arches.

Roberts-Banner was erected as an exposed reinforced concrete building, which was revolutionary for the time. It was the forerunner of several similarly constructed Reinforced Concrete structures from the firm of Trost & Trost.