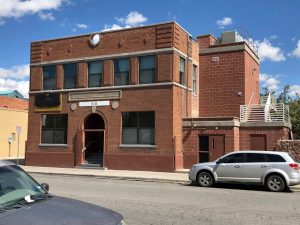 On September 11,1919 a movement was launched at the El Paso Rotary luncheon to erect a memorial in the memory of Robert Krakauer. The idea was suggested to build a structure to house the organization of the Associated Charities, which Krakauer served as president prior to his death.

At the next monthly meeting Horace B. Stevens was elected president and U.S. Stewart, vice president of the Associated Charities. It was voted on to conduct a campaign the first week in December to raise the funds to erect the $25,000 Robert Krakauer memorial building. The structure would be used as a home for the sick and aged.

On November 25, the announcement for the campaign was declared at a luncheon at the Sheldon Hotel. James G. McNary was in attendance and was put in charge of the drive. “This building is for the care of the men, and will not be used as a hospital, however as a clearinghouse,” was stated by Mr. McNary at the luncheon. Mrs. Krakauer, the mother of the late Robert Krakauer, pledged $5000 toward the fund. Mrs. Ruth Krakauer, Robert Krakauer’s widow, pledge $2,500.

In May of 1920 the plans for the Robert Krakauer memorial building were finally accepted at the meeting of the board of directors of the El Paso Associated Charities. Bids for the Robert Krakauer memorial building opened in September. Three firms bid for the construction of the building. The contract was awarded to the J.E. Morgan company. The cost $31,000.

The building was to be constructed of concrete, brick and to be 40 by 90 feet. The building would lodge homeless men on the first floor, with the second floor set apart for tuberculosis patients. This was to be one of the first buildings to combine a hostelry and a health.

The Robert Krakauer memorial building was completed by February 1921. An open house was held the following month with hundreds of El Pasoans showing up to tour the building. The crowds were ushered through the building and educated on the works of the charity. As a result of the open house, those who attend started offering equipment for the new building. The Red Cross furnished bedding, the Spanish-American war veterans pledge their help, El Paso Jewish women pledge to maintain one of the dormitories, S.H. Kress donated kitchen equipment and the list went on.

During the tour it was explained to visitors that the basement of the building was a fumigating room. When a man first entered the building, his clothes would be fumigated and ready for him the next morning. The front of the building on the first floor was to be occupied by the offices of the Associated Charities. Then running half way back on the left side was individual rooms for men in charge and those whose care demanded individual rooms. Across from these rooms was the kitchen, About two-thirds of the way back, was two doors opening to two larger dormitories occupying each side of the rear part of the building with large showers and lockers.

The second floor was almost a exact replica of the first. A large and sunny sunroom was the feature of the top floor, running the length of the building. Every precaution was taken that those of the second floor shall in no way come in contact with men on the first floor. A separate outside stairway was been installed.

The following month, three rooms of the new Krakauer memorial building were given to the American Baby Clinic. A separate entrance was built used to reach the lobby of the clinic. The mother and the baby could come to the clinic to receive assistance and education on taking care of their new baby. Miss Doherty over saw the daily operation of the clinic.

Prepared for the El Paso Public Library by Lloyd C. and June F. Engelbrecht under a grant from the National Endowment for the Humanities, 1990