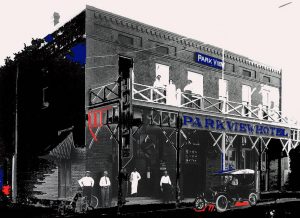 The Reid Opera House was erected at the corner of Pennington and Meyer in downtown Tucson in 1886, built by gambler Billie Reid. In 1902, the firm of Trost & Rust was hired to remodel the structure into a Hotel. The building was renamed the Parkview Hotel because it overlooked Levins Park, with the hotel rooms surrounding the old theater and the interior of the theater used for bathing rooms and utility spaces. The building, which was eventually used as an office structure, was demolished in 1958. It also served, in its later years, as headquarters for the Tucson Police Department’s Detective division. For more information, please see http://www.arizonahistoricalsociety.org/wp-content/upLoads/library_Parkview-Hotel.pdf.

1962 photograph of the building courtesy of the Arizona Daily Star at https://tucson.com/parkview-hotel/image_8ee094a6-22ea-11e7-bc90-b74007735354.html Older image is courtesy of David Lee Guss at Fine Arts America (https://fineartamerica.com/featured/parkview-hotel-tucson-arizona-circa-1908-2011-david-lee-guss.html)