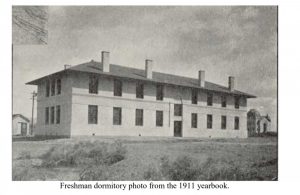 The following is a quote from, and photographs are courtesy of, “The Buildings of New Mexico State University” by Patricia Grumet, from the NMSU Library at https://lib.nmsu.edu/archives/documents/GrumetVol1.pdf.

“The freshman dormitory, building #8, was constructed in 1907. It was one of three buildings that were constructed that year. Plans and specifications for the building were “in the hands of the contractors” by July of 1908. It was anticipated that it would be ready for occupation by the Fall 1909 semester. The dormitory originally had room for 60 men. (Catalog, 1908) It was a Trost and Trost building that was located to the west of Kent Hall and to the north of Old Hadley Hall. The building was rectangular, two stories, and was constructed with a concrete foundation, and walls that were brick and plaster. The dormitory may have had either a tiled or shingled roof. (Englebrecht) The building also featured “living and study room accommodations…a large social room for the use of all. Ample accommodations in the way of baths, lavatories, toilets, and closets are at the service of students rooming in this building. The rooms are nicely furnished under the management of a representative of the college.” (Catalog, 1909) In 1910, the rent for this building was “$4 a month for each boy, two in a room.” The men had to provide their own bedding with the exception of a mattress and pillow. The rent covered the “cost of light and heat and the washing of bed linen.” The dorm was supervised by “a member of the faculty and study hour periods [were] enforced.” The building did not have a dining hall, but the men could eat at McFie Hall. (Catalog, 1911) A north wing was added in 1918, (Catalog, 1953) which expanded the occupancy of the building to 90 men. (Catalog, 1920) Over the years the occupancy of the building fluctuated from as low as 14 to 70 men. In 1936 the offices of the United States Resettlement Administration occupied a portion of the building for about a year. It was during this time that the student occupancy was 14 students. (Catalog 1936) The building had 38 rooms that could house two men to a room. (Catalog 1963) The building was torn down in 1964.”