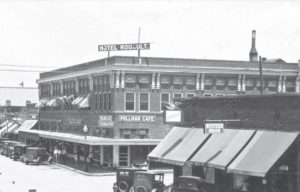 The Hotel Rouault was a two-story red brick Hotel in Las Cruces, New Mexico, designed by Trost & Trost in what is referred to as an Early 20th Century Commercial design, with a touch of Italianate. The original plans called for a four-story yellow brick building, but we are unaware why the plans were altered. The building was demolished in the early 1970s.