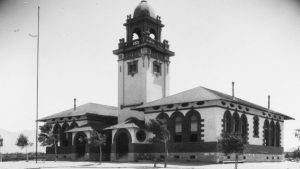 The Holladay School was completed in 1903 in a Spanish design nearly identical to the 1901 Willcox (Arizona) Elementary, designed by Henry Trost independently of the existing firm of Trost & Rust. Holladay School was demolished in circa 1923 so the site could be used for the new Tucson High School.

In April 1901, three Tucson School Board members (Willliam Davis, Leonidas Holladay and Samuel Drachman) met to consider the architectural drawings submitted by Henry Trost and the firm of Forbes & Nevins for 3 new schools. The Board moved and accepted that the schools would be named after them: Davis, Holladay and Drachman. There was some controversy over the decision to name the schools after themselves, however the decision stood. The plans of Trost were accepted for two of the schools, Holladay and Davis, while Forbes & Nevins drew the plans for Drachman.

Image courtesy of the Tucson Historic Preservation Foundation at https://preservetucson.org/stories/277/