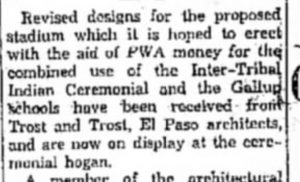 In the Gallup Independent from March 27, 1939, on the first page (via newspapers.com, and pictured here) we learn that Trost & Trost had submitted plans for a Stadium in Gallup, New Mexico. The stadium was completed early July of the following year, according to the same newspaper from 06/26/1940 (page 3), with a seating capacity of 3,800. The stadium was used for school events, in addition to Inter-Tribal ceremonials. The PWA grant mentioned in the newspaper article we have reproduced was approved on April 30, 1940, explaining the delay in construction.

Comparing a period newspaper image of the stadium (Albuquerque Journal, 08/17/1940 page 9) with pictures of the extant stadium shows that the old stadium had been demolished, or completely rebuilt.