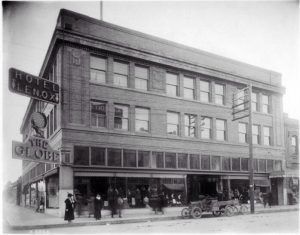 The 1917 Laskin Building, more popularly known as the Hotel Lenox, is an Early 20th Century Commercial designed structure located on the southwest corner of Mesa and Overland. The building was designed by Trost & Trost and involved nearly 5 years of planning and construction before it was opened. Erected in 1917, this is a brick-faced reinforced concrete structure, standing three stories tall with a full basement.

It was erected to house the Globe Dry Goods Company by brothers Louis and Isaac Laskin, and was completed in August of 1917. They planned on using the entire structure for their Dry Goods building, but until they increased sales sufficiently to do so, they decided to open the upper floors as a hotel. The resulting Hotel Lenox was managed by Mrs. Edna Strickland, and after the eventual failure of Globe the “temporary” Hotel stayed in business until at least 1962.