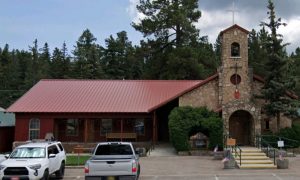 The August 16, 1939 El Paso Herald-Post announced that Trost & Trost would be drawing plans for a Catholic Church in Cloudcroft, New Mexico. Several other newspaper articles from that month confirm that Funds were being raised for the structure, and land had been donated. We believe (with some assurance) that the current Sacred Heart Mission Catholic Church may be the Trost designed structure, although most of the building has been remodeled. Additionally, the design of the facade, and the building materials, are unusual for a Trost & Trost creation; however the plans were drawn very late in the firm’s tenure.

A photograph from the 04/26/1959 Alamogordo Daily News, page 11, shows the current church building as extant then, with a caption that the building is one of the area’s “best known landmarks”, indicating that it was considered a landmark only 20 years after the Trost plans were drawn. This serves as further evidence that the extant structure is likely the Trost design.