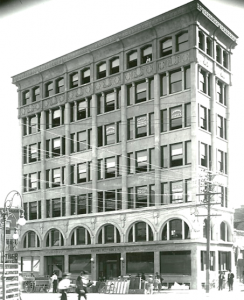 This building was commissioned by the Rio Grande Valley Bank, but approximately 8 months after completion was purchased by the Two Republics Life Insurance company. When Two Republics completed their new building at Texas & Stanton (The International Building, also Trost & Trost) in 1921, the building became property of the City National Bank. On May 21, 1925, after the failure of the bank, it was in turn purchased by Syrian born Salim Abdou (1875-1953), owner of the Abdou Produce and Cold Storage Company, for $150,000 as an investment property – generating the name that El Paso knows the building by today.