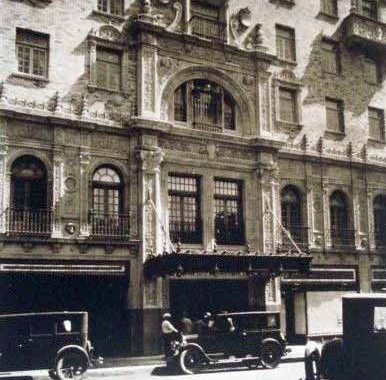 While walking past the construction gridlock currently occupying San Jacinto Plaza down Alameda Avenue, it is impossible to ignore the Hotel Cortez. The building is undoubtedly one of the most attractive in the city, and at the time of completion, it was considered to be an absolute marvel. Alzina Orndorff McGroff of Landry Parish, Louisiana, commissioned the project, hiring Trost & Trost to construct a high rise in place of a hotel, which she purchased 20 years prior. The project cost a then-whopping $1.5 million dollars, the equivalent to around $20 million today, and the product of the investment still shines amongst the buildings surrounding it. The building incorporates a wide variety of architectural influence, blending Spanish Colonial Revival style with Renaissance, Moorish, and Baroque characteristics. The interior design of the building at the time could be considered nothing less than extravagant. McGroff entrusted Mitchel and Halbach of Chicago with decoration. The total cost of the project amounted to $4.5 million, or around $60 million adjusted for current inflation. The building’s history is as illustrious as its aesthetics, at one point President John F. Kennedy stayed overnight during a visit in which he addressed more than 300,000 people.

The origins of the project are just as impressive as the building itself. Pneumonia claimed the life of Alzina Orndorff McGroff two weeks prior to its completion. At the time, it brandished the moniker of Hotel Orndorff, named after Alzina’s late husband, Leander H. Orndorff, who was employed as a conductor for the Southern Pacific Railroad company and met his fate in Maricopa – crushed between two rail cars while signaling for a stopping train. It is speculated that Alzina was left with an inheritance as a result. To support her family of three, Alzina moved into a small house and rented one of the rooms to various occupants. With the money she had earned from renting the extra room, she went on to rent out a 16 room house and from there she opened a two-story adobe hotel in Tucson that also carried the Orndorff name. During a time in which women were unwelcome in the world of business, Alzina proved herself to be an incredibly successful entrepreneur.

She would go on to marry Charles McGroff, the Postmaster of Tucson, in 1890. Over the course of the next nine years, the family continued to own and operate hotels along with various endeavors in real estate. In 1899, Alzina set her sights on the Vendome Hotel in El Paso, which had recently entered the market. After its purchase, she completely remodeled and renamed it the Hotel Orndorff. She was a staunch advocate of woman’s suffrage and became the first president of the El Paso Equal Franchise League along with the El Paso Civic League.

In 1924, after years of continual success, she took out a loan for $825,000 to undertake the project of building what would eventually become the Hotel Cortez. After her death, the Hussman Hotel Company purchased it in 1927 and invested an additional $700,000 in the project. At the time of its completion, it was the tallest building in the Southwest featuring 300 rooms and a variety of other amenities. In 1935, the Hussman Hotel Co. held a contest to rename the location, and the winning submission argued naming the site in honor of Hernando Cortez, the Spanish conquistador.

The building represents years of hard work and sacrifice made by an extremely dedicated and progressive-thinking woman. She set out to ensure the livelihood of her family and left behind a series of impressive landmarks that speak towards her ingenuity and perseverance. The building stands out amongst those around it much like Alzina stood out amongst her contemporaries.