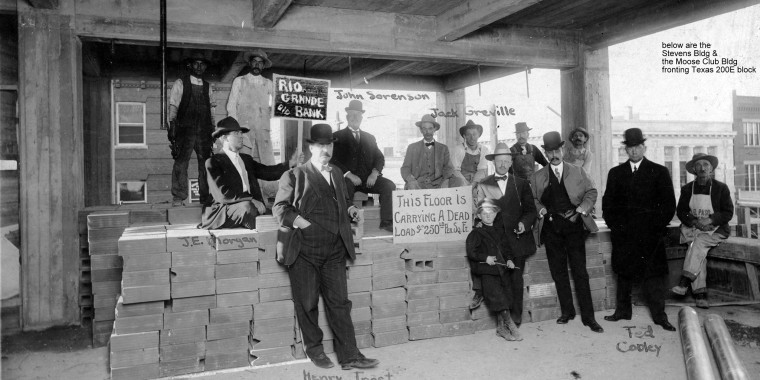 By now we have all read the great news that the Abdou Building, the tall, narrow building that could be called El Paso’s version of the Flatiron Building in New York, has been sold to a group of young investors who plan to renovate the building for residential and commercial use. The group, called Urban Lion LLC, purchased the building after 14 months of negotiating with the previous owner, Bahram Razy. Mr. Razy had maintained the interior of the building and made various improvements to the electrical components, also renewing the roof, and the building was known to be home to various artists and musicians who wanted to live in the heart of downtown – even before investors had begun to make improvements to surrounding structures. It was often lamented, however, that the exterior façade was in dire need of restoration work – the window treatments were crumbling, and chunks of concrete have begun to fall off the west side of the building.

Ben Marcus, along with his sisters Mila and Shea Marcus as well as J.W. Rogers and Tyson Carameros, finalized the purchase only last month. The Marcus siblings have a long history of experience working in commercial real estate, particularly with the family-owned Mimco Inc. Ben noted that he is looking forward to working with a young and energetic group of investors. “My partners have been tremendous with a very hands-on approach in tackling this project. Each of them have been patient and persistent thus far. Undoubtedly we have a cohesive team in place with the same goal for this property.” They have already drafted plans for the exterior renovation, adding painting and lighting to the building in addition to making repairs, and will potentially start work on the building within the next two months. In speaking with Urban Lion, they made clear to the Texas Trost Society that they would like to keep current tenants in place and have a few vacancies in the residential and commercial spaces that will be available for six month or 1 year leases. Ben, an investor in Bassett Tower (home to the new A Loft Hotel), stated that he worked hard to acquire the Abdou Building because he is a sizable fan of Henry Trost’s architectural designs. “There are innumerable reasons that motivated us [to purchase the building]. Downtown El Paso’s rich assemblage of historic properties is still untapped and powerful. Undoubtedly a majority of these properties have not been tended to in decades. It hurts everything (as these properties stand still) It hurts our community, our aesthetics, and our drive to keep young talent and improve our economic impact.  We feel we can come in, upgrade the property to its highest potential, and continue igniting change in the Downtown district.”

The Abdou Building, located at the southwest corner of Texas Avenue and North Mesa Street, is one of Henry C. Trost’s most innovative creations. Originally called the Rio Grande Valley Bank and Trust Building, it was one of the several major banks to erect a skyscraper in the heart of downtown during the Mexican Revolution. The president of the Rio Grande Valley Bank, Walter W. Turney, was a prominent attorney and rancher in town who in 1906 had commissioned Henry C. Trost to design an elegant mansion at 1211 Montana Avenue – presently the home of the International Museum of Art.

The Rio Grande Valley Bank was Trost’s second major edifice in reinforced concrete, the first being the 1909 Richard Caples Building on the corner of Stanton and Mesa Street. It dominated the five-story Caples building when it was finished in 1910 at seven stories high – though only until the completion of Trost’s Anson Mills Building in 1911. The Rio Grande Valley Bank was in the firm of an irregular quadrilateral without any parallel sides. Only the corner of the building facing the intersection is at a right angle. This is one of the first Trost buildings that adopted the basic design that had been established by Louis Sullivan in Chicago, though in this instance the architect exposed the concrete medium instead of revetting the building in brick.

The building went through new owners in 1915 and was then sold in 1925 to Sam Abdou, a Syrian immigrant and entrepreneur, who leased the building to the American Trust & Savings bank. During the Great Depression, the bank failed, starting the building on a trajectory that led this and many other downtown buildings to improper maintenance and care as rents in the area continually dropped. All this lead to the current downtown environment, where rent prices often could not sustain the sizeable cost of restoring a historic building that is decrepit – that is, until the Texas Historic Tax Credit for Historic Properties came online only last year. The State Tax Credit, along with the Federal Tax Credit, combine to offer up to 40% of credits that help pay for the cost of restoration. The tax credits, when combined with local incentives such as the sometimes controversial 380 Agreement, lessen the financial burden of restoration for investors so they can, in turn, save what is left of our architectural patrimony. Ben and the rest of Urban Lion LLC have recognized that the wave of projects coming online downtown has little chance of slowing down. “The Downtown landscape is seeing unprecedented waves of interest and action.  All sectors of Downtown are seeing movement. There are currently 19 or 20 Downtown properties in the process of City Incentive Applications. So in turn, the many dilapidated Historic properties become more compelling.”

The group believes that El Pasoans will be receptive to the new/old urban lifestyle being promoted by Urban Lion LLC, as well as owners of the Martin Lofts and Essex Alley. Tyson Caramaros, who also works with L&M Asset Management in Santa Teresa, believes downtown El Paso will see an uptick in young professionals who will want to move closer to the places they work. “Not quite sure when or how it happened, but over these last couple years, many El Pasoans, young and old, have seemed to fall out of love with the typical suburban lifestyle.  With traffic congestion only getting worse, we are witnessing a major shift in how people choose to live.  The simple fact that people want to spend less time in their cars and more time enjoying their friends and family is why we knew we could make a such a dynamic project like this a reality. Not to mention, the deep sense of pride and adoration our city has always shown for its historical architecture further empowered the decision to set our sights on the Abdou.”

On our part, the Texas Trost Society applauds any investor who is willing to take a risk to restore a historic property in the heart of downtown, particularly when we still see nearby historic buildings falling to pieces. Our hope is that other longtime (and more skeptical) investors will become open to learning about the benefits of leveraging federal and state tax credits in order to make preservation projects financially viable, all while improving the quality of life for all El Pasoans who want to see downtown come back to life. 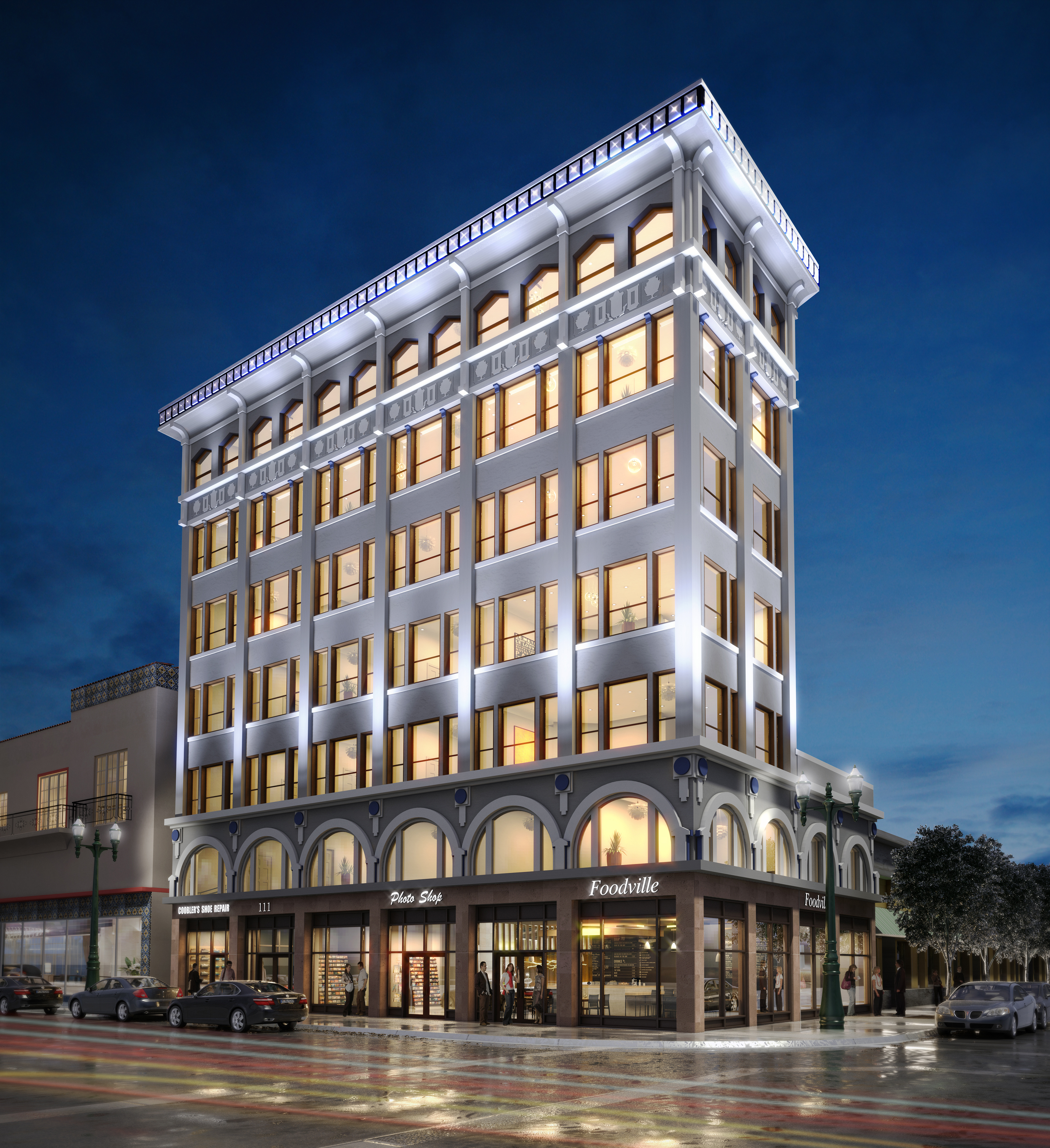