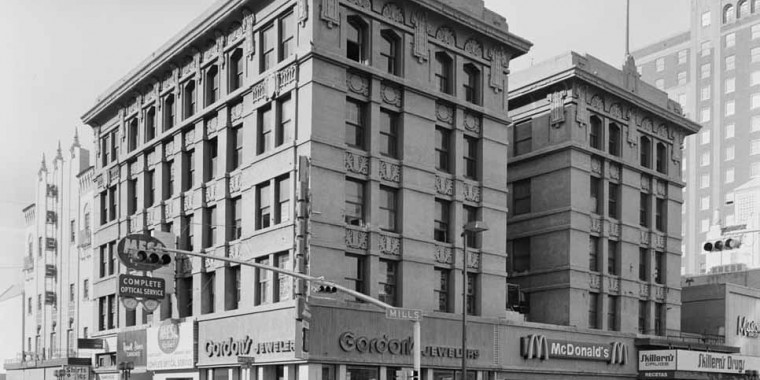 I’ve been thinking lately about the peculiarity of place. I find its formative nature fascinating and the exploration of its traits rewarding. I’d like to share with you the particular place I find myself in now.

I’m sitting at my desk in the corner office on the second floor, facing northwest, enjoying the repository of sights that my windows frame. I’m in the Banner Building downtown at 215 N. Mesa. You probably know the place. Or maybe you only know it the way you know that outdated painting in your doctor’s office; you’d recognize it if you saw it, but you’ve never had much reason to pay attention to it. It sits on the corner of N. Mesa St. and E. Mills Ave., across from the San Jacinto Plaza on one side and a fenced-off empty lot on the other.

When we consider place, our instinct is first to describe physical characteristics: The Banner Building is a five-story structure built using reinforced concrete by the architectural firm, Trost and Trost, in the Romanesque style. Each floor’s frieze shows ornate details of European and Mesoamerican-influenced designs — heraldic, floral and speech-scroll motifs, more specifically. Its use of exposed reinforced concrete is the first in El Paso and one of the first in the nation. The Banner Building’s hefty rectangular base supports four stories of U-shaped offices and tells of its longevity despite near-desertion.

But place isn’t only physical – it can’t be. There’s an element of time, of past, present, and future, that’s tied to place, and my experience of this particular place is inexorably tangled in it. The Banner Building was built in 1910, and at the time of its completion was the largest office building in El Paso. It originally held offices for the prominent professionals of downtown. Congress even approved it holding a Mexican spy-station during the Mexican Revolution. A century later I, too, use this building covertly as a view to a city. From my office’s vantage point the landscape and progression of the city can be watched carefully: businesses giving downtown a try, the Martin Building’s renovations, new towers planned, construction in all directions.

Another element of place, noise, distracts me. I focus in on the San Jacinto Plaza below me. The rhythmic whacking of some metal tool hitting concrete outside matches my clock’s second hand – a fitting cadence, as many El Pasoans countdown to the Plaza’s reopening. The floors above let out sonorous thumps as the building’s jeweler walks through the hallways. This sound ceases when his heavy oak door slams shut. Even more so than appearance, the noises a building makes can reveal its age.

It is in these sounds that the building and I share a moment of contentment. The Banner Building stands rigid and waits patiently for its turn in renovation while I enjoy recognizing its peculiarities.