In and Out of Time: 100 years of El Paso High School - Trost Society

In and Out of Time: 100 years of El Paso High School 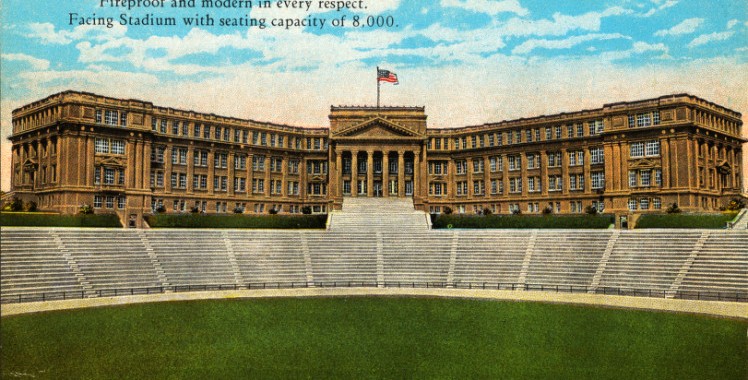 This year marks 100 years since El Paso High’s opening in 1916. When something’s been around for that long, there’s a natural tendency to reflect and wonder: about its history, stories, and other attributes. And if you’re like me it’s hard not to extend those thoughts to more penetrating ones about its essence and place in time. Hoping to better investigate these thoughts, I visited El Paso High School last week. Here’s a bit on how my visit unfolded.

I headed straight to the main entrance and stood between the two wings that extend from the center porch, forming an L. Its arms embraced me, as they do El Paso. I looked up at the impressive façade and recalled what I learned in Art History courses in college; I recognized the Corinthian ordered columns that support the entablature above, the frieze that simply reads “El Paso High School” just above the architrave. The temples of Ancient Greece, where symmetry and proportion were of the utmost importance, influenced this building. The pediment, a triangle formed by a raking cornice, draws my attention for a while, as the barest part of the façade. Every other part is fragmented into squares, lines, impressions, and ornate details, with each fragment casting a shadow on an adjacent part of the entablature. I take a peek inside and notice the beautiful marble floor and coffered low ceiling, and wonder what other striking features I could find inside. There really is great detail in this Neo-Classical Revival building.

Gazing intently at something can prevent the other senses from working, though. I became aware of this fact, and the first sense that returned was my touch – it was colder, which meant I must’ve been at the entrance for longer than I thought. My sense of smell was revived next. That sweet, rain smell of the creosote bush swelled in my nostrils, and I gazed up to see if rain was to be expected. There were some clouds in the sky, but I’ve lived in El Paso long enough not to get my hopes up. I looked back to the school, with the late afternoon mountains, rigid but light and luminescent like amethyst, providing the backdrop. It was at that moment, noticing the stark contrast between the building and its environment, which I began to ponder its place in time.

You see, the Greeks had a purpose in building their magnificent temples in the style that they did. Great emphasis was put into their buildings reflecting their ideologies, especially those informed by the Greek Philosophers who would influence much of Western thought. These thinkers, and especially Plato, felt burdened to answer the toughest questions about the universe. About time and all of its contradictions, for example, they asked, “how can the world appear to be both permanent and ever changing?” Plato answered this confusion by separating the universe into two realms: our world of nature and experience and the transcendent world of forms. This separation allowed a reference to ideal and perfection to the world of experience that we are in, to make sense of the confusion. The purity of forms that is lines, shapes, symmetry, and balance, give everything in the world something to strive for. The Greeks insisted that their buildings reflect this purity, and built them with the intention of their existing outside of this world and outside of time. The Platonic theory of forms thrives in the marble structures of antiquity.

And that same timelessness and perfection were sought after by our Founding Fathers nearly two millennia after the Ancient Greeks. Our newly formed Republic aimed to align itself with the influential Republics of the past, building its most important structures in the Neoclassical style to show the lineage of great civilizations in which we follow.

And then I wondered about El Paso High School and its place in time. Although built in this very style of timelessness, it is set against the harsh and changing environment of the southwest. I asked, “did it reach its aim of timelessness and perfection when the final brick was laid?”

No, and that’s the beauty of buildings; they are perpetually built, long after the keystone is placed. Its inhabitants – the workers, students, teachers, and community members – all contribute to its growing and changing legacy in every interaction they have with the building. In this way, El Paso High School slips in and out of time, breathing ideology and growth with every passing moment.

Here’s to 100 more years of El Paso High School, our growing and timeless Lady on the Hill.